This article will introduce you to Apache Cassandra by talking about its characteristics, components and use cases.

What is Apache Cassandra?

SQL databases (such as Oracle, SQL Server, MySQL etc.) have evolved in terms of features, maturity and stability over last few decades. These databases have been instrumental in success of many applications dealing with structured data such as ERP Data, census records, library catalogues etc.

However, in recent years, companies are utilizing unstructued data (images, audio, web logs, emails etc.) to derive and enhance their businesses due to advent of social networking and reduced cost of computing resources such as CPU and memory. This unstructred data does not conform to any pre-defined schema and dynamic in nature. Additionally, this data is so huge (in Terabytes or Petabytes) and therfore very expensive to be processed on server machines, as it requires costly, dedicated and sophisticated hardware.

This is where NoSQL databases come to rescue and make it possible to manage this huge unstructured data. NoSQL databases have capability to store the data on multiple machines and response to the client queries in few miliseconds. Since these databases use multiple machines for storing the data, there is no need for costly and sophisticated hardware. This helps companies manager their data in a cost effective manner by letting them use commodity hardware.

Apache Cassandra is an open source column-family NoSQL database that helps us achieve high performance coupled with high availability and scalability. We will be discussing its characteristics and components in following sections in detail.

Here are some of the characterisitics of Apache Cassnadra that make it worthy to be utilized for managing huge structured and unstructured data:

After characteristics, let's now look at various components of Apache Cassandra in order to understand its working in better way: 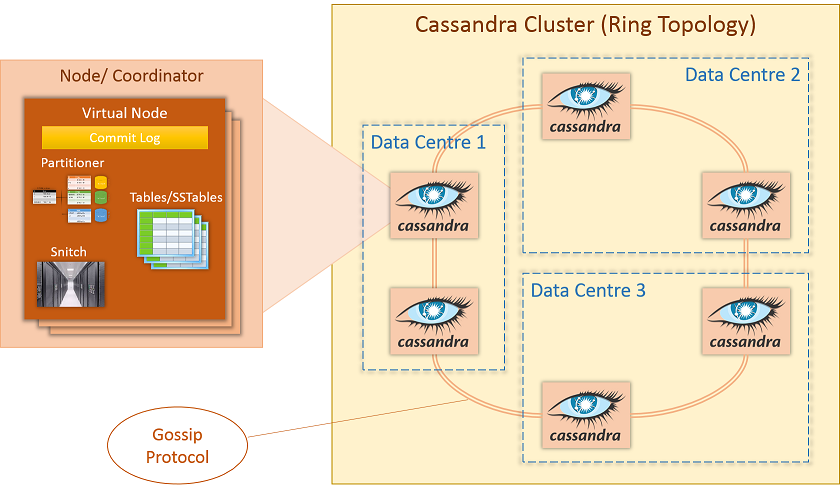 Use Cases of Apache Cassandra

Apache Cassandra can be used for any use case that demands massive scalability, an always on architecture, high performance, strong security, and ease of management, to name a few. Here are some of high level domain use cases of Apache Cassandra: